As previously announced, current ESVAGT CEO, Søren Nørgaard Thomsen, is leaving ESVAGT after 7 years of service to become CEO of Blue Water Shipping. Kristian Ole Jakobsen will take over as Interim CEO from today. Kristian joined ESVAGT in 2007, prior to which he held a number of managerial positions within the A.P. Moller Maersk Group.

Kristian started his career at ESVAGT as Chief Technical Officer and was promoted to Chief Operating Officer in 2013. In this role, he was responsible for the ship management, procurement, newbuilding, and workshop departments.

“Kristian is the ideal person to lead the company through its transition period due to his in-depth knowledge and experience of ESVAGT over the last 10 years. He knows the organisation extremely well and has played a key role in ESVAGT’s continued development within the oil & gas industry as well as its successful entry into the offshore wind industry” said 3i Infrastructure plc and AMP Capital, ESVAGT's shareholders. “We are currently focussed on finding the right person for the permanent CEO role, and we are delighted to have Kristian Ole Jakobsen leading the company in the interim alongside a highly capable senior management team”.

Kristian Ole Jakobsen said “I am honoured to have the opportunity to lead ESVAGT during this transition period, and will focus on further developing and strengthening the company in line with our strategy. Despite the recent challenging oil & gas market conditions, ESVAGT still has many exciting opportunities in the pipeline. In all aspects, it will be business as usual”.

In addition, Jesper T. Lok will step down as Chairman at the end of December. During his time as Chairman, Jesper has led the company through a challenging period, which has encompassed one of the worst offshore oil & gas markets in recent history. Despite this, ESVAGT remains a leading player in the emergency rescue and response vessel sector, and is now also the largest player in the growing offshore wind service operation vessel market, with this segment expected to represent an increasing share of future revenues.

“Over the past couple of years, we have navigated ESVAGT through a historical downturn in the oil and gas markets. It has been a pleasure to see how robust ESVAGT’s business model and organisation has been in these turbulent times, and a particular privilege to work with the team on cementing our position in the rapidly growing offshore wind segment” says Jesper Lok and continues “It is always sad to say goodbye but I have concluded that the time is right for a new Chairman to appoint the new CEO and lead the next stage of the company’s development” concludes Jesper Lok.

ESVAGT’s shareholders said: “We would like to thank Jesper for his commitment and effort in steering ESVAGT through a difficult time for the offshore oil & gas industry. In addition, he has successfully worked with senior management to position the company to take advantage of the growing pipeline of offshore wind opportunities. We are currently in the process of identifying a new Chairman to help lead the company through its next phase of growth.” 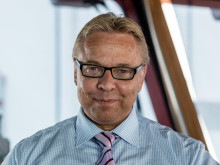