This morning ‘Esvagt Sigma’ received a mayday from a small pleasure craft who was taking water in and had lost propulsion. ‘Esvagt Sigma’ was released from standby duties and send to rescue.

The distance was 15 nautical miles. Wind and seastate was 6-7 Beaufort.

‘Esvagt Alpha’ was on her way to ‘Esvagt Sigma’ to perform crew change. At the time of her arrival it was concluded that the pleasure craft could not be saved it was decided to rescue the 4 persons to ESVAGT Alpha.

Bravo Zulu to the crew on ‘Esvagt Sigma’ and ‘Esvagt Alpha’ for a job well done. It documents the value of the daily training performed by all ESVAGT vessels in similar weather conditions. 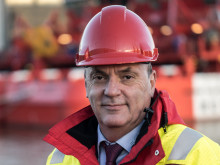