ESVAGT and Hess raised the innovation bar with the ‘Esvagt Innovator’. Their cooperation continues to grow.

Few vessels are more appropriately named than the ’Esvagt Innovator’. The vessel, which entered into charter as a newbuild for Hess at the end of July 2018, certainly lives up to its name, says the vessel’s captain, Jesper Møhring:

‘The vessel is technically the most innovative we have ever built. It was planned down to the last detail by Hess and ESVAGT to a standard that commands the greatest respect,’ he says.

‘With the ‘Esvagt Innovator’, we can perform tasks that used to require several vessels. The vessel, among other things, acts as a PSV (Platform Supply Vessel), standby, supply, cargo handling, ROV launch and recovery, relocation and maintenance of SAL systems, provides accommodation for up to 13 crew members and 36 technicians, and can also handle a fair amount of crude oil in connection with hose end valve inspections on deck,’ says Jesper Møhring:

‘Hess really raised the bar with this vessel, and in the first year we have been able to push the limit for what can be achieved with one vessel. The vessel is the first we have built that has cargo rail cranes and an integrated A-frame. It is definitely technically challenging – but we deliver the goods,’ says Jesper Møhring.

The vessel is innovative in many ways, and that has a positive effect on the working relationship between Hess and the crew.

‘The many possibilities with the vessel and Hess’ high level of commitment to exploiting them and using the vessel in the best way possible has fostered a far closer dialogue and cooperation than ever before. We are not ‘just’ a supplier and Hess is far more than ’just’ a customer; we are mutual sparring partners. Our working relationship has developed enormously during the first year, for example on optimization and the environment,’ says Jesper Møhring.

ESVAGT's new, ultramodern MRV, the 'Esvagt Innovator', enters into contract for Hess on the South Arne field in July. 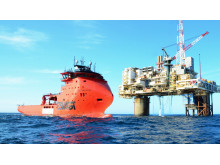