The Barents Sea is cold all year round and during the winter season, it is deprived of daylight for most of the day.

A 40 year old Scottish engineer from the semi-submersible rig, the Scarabeo 8, was remarkably lucky to be plucked from the cold, dark waters of the Barents Sea in the early hours of the morning of the 20th of February 2015.

The rescue operation, together with ESVAGT’s continually high safety performance, are why ESVAGT has now received the ENI Safety Award 2016.

“We have spent a great deal of effort training the boat operators to work in the very special conditions that prevail in the Goliat field,” says Chief Commercial & Safety Officer Ole Ditlev Nielsen, who, together with ship’s master, Morten D. Holm, accepted the award in Milan.

The ’Esvagt Aurora’ was praised for its optimal preparation for the situation. As part of its training, crew from the ’Esvagt Aurora’ had, for example, sailed closed beneath the rig to inspect the access conditions to prepare itself for operations in the dark or in bad weather.

“The Goliat field is very challenging to work in; dark for one half of the year and light for the other. There are also special polar low pressure systems that are unpredictable and very challenging for boat operations. We spent a great deal of energy training to become confident in operating in these conditions, and we are very pleased that this has resulted in a successful rescue,” says Ole Ditlev Nielsen.

While working on the rig, the Scottish engineer fell through a gap in the walkway and into the sea, 13 metres below. A colleague saw the incident and raised the man overboard alarm. The ’Esvagt Aurora’ received the message at 4.11; the man was rescued from the water four minutes after the alarm was sounded and taken on board the ’Esvagt Aurora’ after a total of just six minutes.

At 6.25, he was evacuated by helicopter to the hospital in Hammerfest and was discharged without injury two days later. 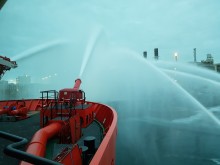 “The flat hierarchy makes us strong in intense situations”

One of the really great qualities of ESVAGT is the culture of cooperation that permeates every part of the shipping company. We have a flat structure and a hierarchy where the distance from the youngest person to the top manager is very short...