On 17 September 2015 the ownership of ESVAGT was transferred from the A.P. Moller-Maersk Group and ESE Holding to ERRV ApS, jointly owned by 3i Infrastructure plc and AMP Capital.

“Due to lower oil prices we are expecting reduced levels of activity in the oil and gas industry in 2016. In order to prepare for this new environment, we have rolled out a programme to reduce costs and optimise our operational performance,” says Søren Nørgaard Thomsen.

ESVAGT’s primary activity is to deliver safety and support at sea. ESVAGT specialises in emergency response and rescue (ERR) services for operators of oil and gas installations as well as services for the offshore wind farms. The primary market is the North Sea. In 2015 ESVAGT increased its presence within service operation vessel activities for offshore wind farms, and the shipping company established a sales office in Aberdeen, UK, to help grow its market share in the UK.

The employee count has increased from 850 to more than 900, of which approximately 65 are based onshore.

SOVs for operation and maintenance of wind farms far from shore is a new focus area for the shipping company. This new strategy was introduced in 2015, where ‘Esvagt Froude’ and ‘Esvagt Faraday’ were brought into operation for Siemens Wind Power to service wind farms in the Baltic and the North Sea.

ESVAGT’s status as first mover and the leading SOV operator in the offshore wind market has been cemented with orders for two additional Service Operation Vessels. One order is for the Dudgeon Offshore Wind Farm (operated by Statoil) in the UK and the other order is for the MHI Vestas Nobelwind project off the Belgian coast. The new built vessels are due for delivery in 2016 and 2017 respectively. 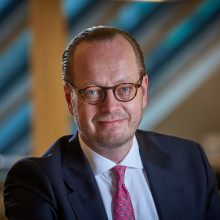 The shipping company’s new owners have chosen a chairman with a particularly solid knowledge of the company – ESVAGT’s former chairman of the board, Jesper T. Lok.

“We have bought the industry’s best”

ESVAGT’s new owners will continue the current direction of the company and strengthen ESVAGT’s position as industry leader.

In 2014 ESVAGT grew the fleet with two newbuildings in the C-series; 'Esvagt Claudine' and 'Esvagt Cornelia' and moved into a new headquarters in Esbjerg.