950,000 British homes will be supplied with green energy when the Moray East Offshore Windfarm off the coast of Scotland is completed in 2022.

ESVAGT’s newbuilt Service Operations Vessel (SOV) ’Esvagt Alba’ will be the base for operations and maintenance on the windfarm, and Thursday the SOV called on Fraserburgh Harbor, where the final Marine Surveys awaits.

The ’Esvagt Alba’ is the second of three purpose-built Service Operations Vessels (SOV) that ESVAGT has built for Vestas. She is the sister vessel to the previous newbuilt in ESVAGT’s fleet, the SOV ’Esvagt Schelde’ now in service for Vestas in the Borssele 3-4 and Northwester 2 windfarms in Dutch and Belgian waters respectively, both working from their base port in Oostende.

“The sea trials have gone well, and the DP system and height adjustable W2W gangway in particular have been thoroughly tested”, he says.

As always, ESVAGT has been on the lookout for opportunities for improvement but not many changes have been made between the two deliveries.

“After half a year in the windfarms, all feedback on the ’Esvagt Schelde’ has been positive and the adjustments we have made between the two sister vessels have been limited to minor improvements to the interior design”, says Gerner Eskelund.

FACTS:
When completed in 2022, the Moray East Offshore Wind will supply up to 40 percent of Scottish energy needs.

New contracts send ESVAGT on the hunt for 50 new seafarers

New contracts in the North Sea require ESVAGT to mass-recruit. Boosts in Denmark and the Faroe Islands have r﻿esulted in great contacts.

Focusing on innovative solutions, two of the key stakeholders in the Danish North Sea are joining forces to create the logistics of the future in the North Sea.

Ida is the world’s first Ampelfrau!

’Esvagt Froude’s’ Ida Teglgaard is the first woman to be trained as person in charge of an Ampelmann operation. 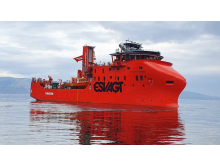