The ’Esvagt Preserver’ is the latest of the group 3 vessels to be given a life-extending update.

If you date back to 1966 and have been working in harsh environments all your life, you might well need a makeover too. This is what the ’Esvagt Preserver’ has just been given, as have several other ESVAGT group 3 vessels; the oldest vessels in the fleet.

The ’Esvagt Preserver’ dates back to 1966 and was rebuilt to suit ESVAGT requirements in 1981. Now it could almost change its date of birth to 2015. Over the last 12 weeks, the vessel has been thoroughly re-fitted and the results are excellent:

“We have been given almost everything we have been asking for over the years,” says captain Frank Nielsen, who, together with the two crews of the ’Esvagt Preserver’, has played a major role in the refit.

Both crews have had an influence on what should be done – and have even picked up their tools and helped:

“Everywhere we could help, we did. Having a say in what was being done was very important to us – especially when we have wanted switches moved, drains moved, ceilings raised, and so on for so many years. It is great that it is finally being done and that we will be getting the vessel the way we want it. It may not sound much, but small details make a huge difference on a day-to-day basis,” says Frank Nielsen.

The rebuilding of the ’Esvagt Preserver’ encompassed the interior, the exterior and the engine.

Most noticeable is the addition of a forward thrust azimuth, which makes it possible to move round on standby without starting the main engine. It reduces emissions, saves fuel and significantly increases comfort.

The vessel has also been fitted with a sprinkler system. The old CO2 system has been replaced by an inergen fire suppression system that is not hazardous to humans when activated. The wheel house has been extended. The entire main deck accommodation and wheel house have been taken down and rebuilt; new wiring has been installed, new ceilings erected, new decks and bulkheads installed along with new toilets, bathing facilities and furniture. A number of instruments on the bridge have also been replaced.

“The crew built a new landing outside the reception themselves. They installed piping from the accommodation area to the boat dock so we no longer need a hose on the deck, rebuilt the store room, renovated our gates, mounted a window washer round the wheel house – and we have also stripped back 25 years of old paint; several thousand litres of paint at a guess,” says Frank Nielsen.

All in all, the vessel is as new as can be – with the exception of one important detail: 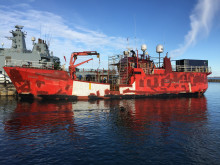 With the refurbishment of the ’Esvagt Preserver’, five of ESVAGT’s eight group 3 vessels have received an extensive life-extension refit at the shipyard in Søby.

Several of ESVAGT’s oldest vessels still have important roles to play – therefore their lives will now be extended with comprehensive overhauls. ’Esvagt Echo’ is first to go.