ESVAGT will extend this position in the autumn when the new build H-048 starts operation at the 165 MW offshore Belwind 1 project in Bligh Bank, Belgium. The vessel replaces the ’Esvagt Supporter’ after six years of good cooperation with MHI Vestas Offshore Wind on the offshore wind farm.

At 58.5 metres, the new SOV is much larger than the ’Esvagt Supporter’, giving it more cargo room and space for 22 technicians in addition to the vessel’s crew. It is though somewhat smaller than the SOVs, the ’Esvagt Froude’ and the ’Esvagt Faraday’, that are in service on the offshore wind farms, the Baltic II and the Butendiek for Siemens Wind Power, and the ’Esvagt Njord’, that works on the Dudgeon Wind Farm for Statoil.

“The new vessel is a good example of how flexible the SOV concept is,” says Søren Karas, Chief Commercial Officer for ESVAGT:

“We are pleased to show how the SOV concept can perform tasks in several categories and that it can be adapted to suit the needs and wishes of our customers; from the number of technicians to cargo space, workshops, ROVs, helipads and much more. The newly built vessel is for instance the first SOV new build without a gangway system for transferring personnel. The design itself allows for a walk-to-work gangway but based on good experience with Safe Transfer Boat transfers from ‘Esvagt Supporter’, MHI Vestas could conclude that in this case, transferring technicians, equipment and spare parts would be more efficient using ESVAGT’s Safe Transfer Boats: One STB12 and two STB7”, says Søren Karas. 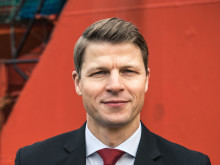 Company executives gather today at Port of Oostende to christen the ‘Esvagt Mercator’; as the ship readies to support more than 100 offshore wind turbines in Belgian waters.

ESVAGT’s pioneering Service Operation Vessel concept has surpassed expectations but its potential is far from fully exploited yet.

SOVs can deliver twice as much

Excellent performance by ESVAGT’s unique Service Operation Vessel (SOV) concept has freed up capacity – and we need to make the most of it.

Optimising operations of existing offshore wind farms and more precise calculations for new projects are the driving forces behind ESVAGT’s implementation of the MAINTSYS O&M simulation programme from Shoreline.

ESVAGT has been very successful with its Safe Transfer Boats (STB). The next STB12 for MHI Vestas’ SOV is on the way. All the experience gained from working at the offshore wind farms, Butendiek and Baltic II, will be taken on board.

The SOV concept in 2 minutes