ESVAGT has been servicing the energy sector since 1981 and has set the standard for safety and support at sea.

Today, the shipping company consists of 42 vessels and over 1,100 employees, and ESVAGT has just entered the growing American offshore wind energy market to play its part in the green transition.

‘We were certain that we could make a positive difference to safety at sea.’

As ESVAGT turns 40 on the 14th of May, it is clear that the founders were right. Throughout its first 40 years, ESVAGT has set the standard for safety and support at sea. With 148 people rescued to date, the shipping company’s offshore vessel crews have absolutely made the crucial positive difference that the founders wanted. The most striking rescue was when the rig ‘West Gamma’ was hit by a violent storm in 1990 and sank. Fast Rescue Boats from two ESVAGT vessels – in heavy storm and pitching seas – rescued 46 people from the water. And the philosophy from the company’s formative years that ‘if you want to work with rescuing those at peril in all kinds of weather, you have to be able to look after yourself’ remains intact.

The foundation of all ESVAGT’s work remains that you need the right competences, the right training and the right equipment to do the job. And that is why ESVAGT continues to be fully focused on ensuring they have the proper training, development and improvements – even after 40 years.

ESVAGT was founded to take advantage of the opportunities within the dawning Danish energy production in the North Sea. It started with two converted fishing trawlers in the Danish sector in 1981; today, ESVAGT’s fleet of specially built Emergency Response and Rescue Boats are at work in Denmark, Norway, Great Britain and Holland.

Each year, ESVAGT transfers more than 75,000 people between SOVs and offshore wind turbines using gangway systems and over 40,000 people by STB.

ESVAGT has now fully established itself as European market leader in the offshore wind energy market with its seven specially designed SOVs, and this is a position that the company is keen to build upon. Two more SOV vessels are on the way in 2021, and ESVAGT has recently set up business in the USA to support the American offshore wind energy industry.

‘Offshore wind energy has developed from being a European project to becoming a global industry with significant rates of growth. As an ambitious company, we are of course looking at how we can expand as offshore wind grows globally and as our customers enter new markets – and USA is clearly one of those,’ he says.

ESVAGT has its headquarters in Esbjerg, where 80 employees work in its offices and workshops. A further 1,000 employees work offshore on board its vessels. ESVAGT also has offices in Aberdeen and Copenhagen and has recently entered into a joint venture with the company, Crowley, on the American east coast.

Since 2015, ESVAGT has been owned by 3i Infrastructure and AMP Capital.

Focusing on innovative solutions, two of the key stakeholders in the Danish North Sea are joining forces to create the logistics of the future in the North Sea.

Ida is the world’s first Ampelfrau!

’Esvagt Froude’s’ Ida Teglgaard is the first woman to be trained as person in charge of an Ampelmann operation.

The ship’s chest makes a difference

A donation from the ship’s chest on board the ’Esvagt Delta’ has been put to charitable use.

The ’Esvagt Castor’, the ’Esvagt Carpathia’ and several other ESVAGT vessels have been signed up for various offshore campaigns.

Equinor, operator of Dudgeon offshore wind farm, has presented those aboard the ESVAGT Njord vessel with a Safety Award, to honour their life-saving actions in the rescue of seven fishermen.

ESVAGT weathered the headwinds in 2020

The ’Esvagt Dana’ supports Siemens Gamesa in the Baltic

The ’Esvagt Dana’ is back in the Baltic 2 offshore wind farm to support Siemens Gamesa during maintenance work. 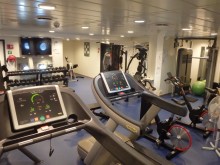 Welfare for technicians and crew is important to Triton Knoll. Collaboration with ESVAGT and SDU's Center of Maritime Health and Society ensures health and welfare in the Triton Knoll offshore wind farm. 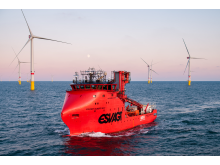