The ’Esvagt Connector’ practises an emergency evacuation from a platform.

Person #9 is normally a Bachelor of Commerce student but today he is on the brink of a psychological breakdown:

“You have no physical injuries but you are worried about how your colleague, Jens, is. You ask about him again and again and interrupt constantly - understood?”

Pia Frandsen, nurse at Maersk Training, rounds up her briefing of Person #9 and adds soot stripes to his face before turning her attention to Person #10 who has ”a broken lower arm and is suffering intense pain”. 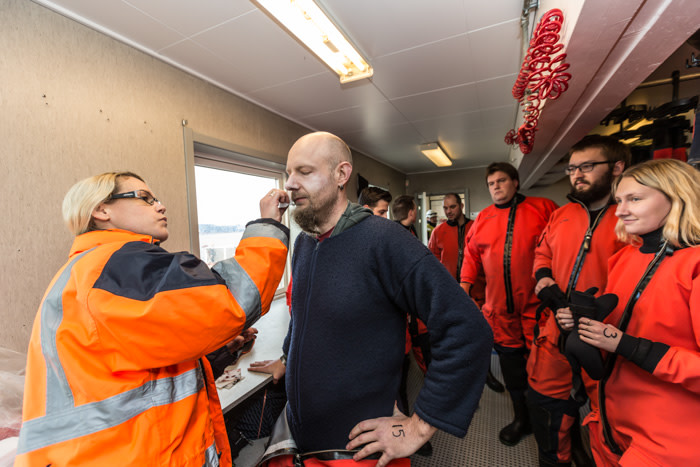 It’s a Thursday afternoon at Dokhavnen in Esbjerg and 18 actors are waiting for disaster, which will soon happen when the actors enter the water at Maersk Training’s exercise platform, ’Stardos’.

At the other end of the harbour basin, the crew of the ’Esvagt Connector’ are a picture of calm and tranquillity. Captain Henrik Pedersen has just poured himself a fresh cup of coffee when the first message from the ’Stardos’ comes through:

“A fire alarm has sounded – we are investigating!”

Henrik Pedersen acknowledges the message and briefs the crew that something may be underway:

“Get ready to launch the boat in the water,” he says over ’Esvagt Connector’s loud speaker system.

The next call from the ’Stardos’ comes just minutes later:

”Fire out of control. Crew panicking. We may have people in the water!”

Henrik Pedersen sounds the Man Over Board alarm on the ’Esvagt Connector’. The boatman and two crew members quickly and safely man the Fast Rescue Boat (FRB) while Henrik Pedersen tries to ascertain how many people the FRB needs to rescue.

The bridge of the ’Esvagt Connector’ buzzes hectically. The ’Stardos’ reports that it is unable to launch their lifeboat – we are jumping into the water! – and Henrik Pedersen starts to juggle updates to the FRB, dialogue with ’Stardos’, orders and messages to the crew and ordering of rescue helicopters. The coffee sits untouched, growing cold in the cup.

The FRB rescues the first two from the water, evacuates them to the ESVAGT vessel and rushes off to rescue the next ones. The crew of the ’Esvagt Connector’ takes the rescued men below deck to the chief officer and medic, Mogens Jeppesen and to deck hand and AMA (advanced medical aid) André Bendixen in the hospital on board.

“I can’t breathe,” gasps one actor, while another is bleeding from an open wound.

They climb out of their suits and up on to the examination couch. The FRB has returned with more injured people. They now fill the corridor in front of the hospital; crew members introduce André Bendixen and Mogens Jeppesen to the latest arrivals to the sound of moaning, weeping and lamentation:

“This one is unconscious; this one has abdominal pains and the man over there has a broken leg.”

André Bendixen treats the injuries, gives oxygen and prescribes pain killers. He uses compresses and donuts, cleans wounds and patches them up. Mogens Jeppesen records and administrates, and together they sort the injured into those who are ill, who are injured and who are in a serious condition. Patients who have been treated are moved on. Other crew members are given instructions in the form of brief commands:

“Check how conscious the man over there is. The woman over there needs artificial respiration. Keep an eye on the man there – recovery position. Can we get her moved? The defibrillator is here. All clear? Let’s go! This man needs evacuating.” 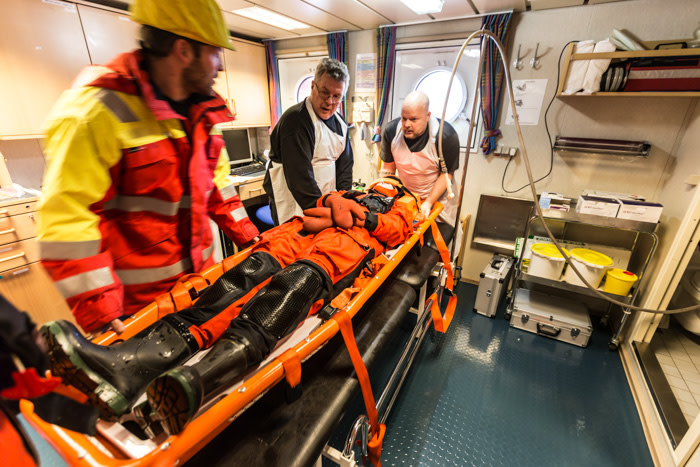 The deck is covered in water. André Bendixen and Mogens Jeppesen receive new patients all the time; they are surrounded by cries of pain and moaning.

“Where is Jens? Is that Jens?”

Person #9 had been allocated a treatment couch but is now getting in the way in the hospital before a crew member takes him out of the way.

Up on the bridge, Henrik Pedersen is working hard to keep on top of things. The radio and telephone are red hot: the rescue helicopter is on the way and communication continues with the shipping company and platform owner by radio and telephone. Suddenly there is a journalist on the line: “Can you confirm that there has been an explosion?” Shortly afterwards, the wife of one of those rescued calls to ask: “Is my husband all right?”

Below deck things are calmer. First aid treatment is finished and the crew accompanies the four who are most injured up on deck so they can be readied for helicopter evacuation. One has a broken back and has been strapped to a spine board.

“They are going to take you to hospital. They will soon patch you up again. You’ll be as good as new,” promises a crew member to a crying actor.

Nurse Pia Frandsen and Fleet Manager, Asger Stürtzel Sørensen, look at each other. The helicopter evacuation is the final stage of their planned disaster and the day’s exercise will soon be over.

“Thanks for your help today,” says Asger Stürtzel Sørensen, and suddenly everyone is cured and smiling – and the crew breathes a sigh of relief.

”You were really heavy to move,” laughs one of the crew to the actor who lay unconscious in the corridor.

The actors disembark and the crew gathers at the bridge for an evaluation.

“Well, what did you make of that?” asks Asger Stürtzel Sørensen.

“Hard! But just as we expected it to be,” says one of the crew.

“The actors were good. They really stressed us,” says another.

The captain is pleased:

“Everyone got into the spirit of the exercise and did what they had to do and what they could do. There were a few small things that happened, as they always do when it really counts. You can’t predict everything and the most important thing is that you always do what you deem best in the situation at hand,” he says.

ESVAGT on its “Tour de North Sea”: ‘Practicing strengthens our emergency preparedness and maintains our competences’

Daily training in the entire fleet keeps ESVAGT sharp, and the shipping company’s own assessor team is visiting the North Sea in ESVAGT’s “Tour de North Sea” to strengthen and deepen competence levels.