The ’Esvagt Beta’ was visited by the Minister for Energy, Supply and Climate, Lars Chr. Lilleholt.

The Minister for Energy, Supply and Climate, Lars Chr. Lilleholt, could barely have timed his visit better when he came to ESVAGT on the 18th of January as part of his tour to a number of energy related companies in Esbjerg.

Just days before the visit, the ministry announced that Danish wind turbines had set a world record in 2015 by supplying 42.1% of the total consumption of electricity in Denmark: the largest proportion of wind energy anywhere in the world. It was therefore rather fitting that the minister could hear more about how a large part of this wind energy is produced during his visit to Esbjerg. 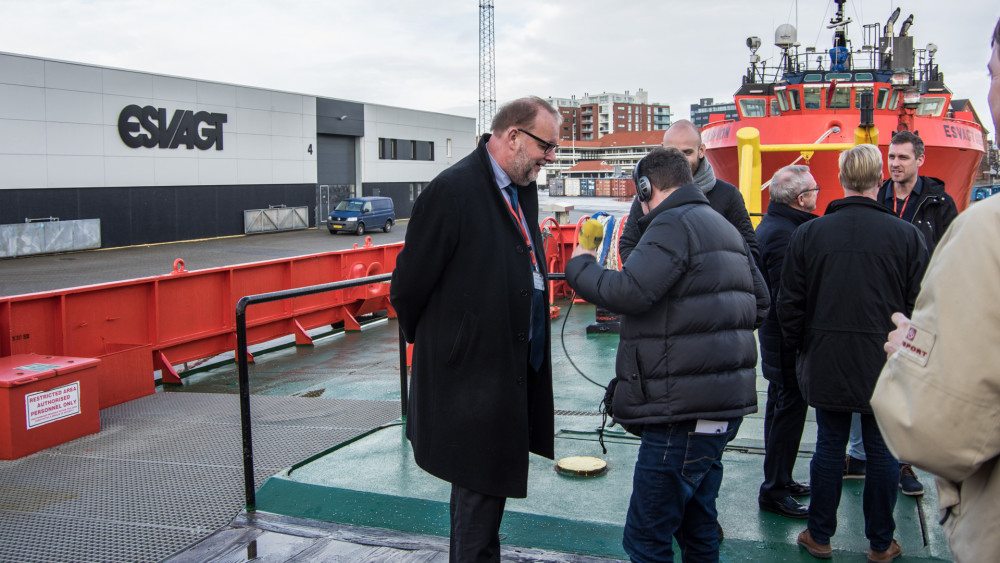 Lars Chr. Lilleholt had fellow party members, Carl Holst and Hans Christian Thoning from the Danish Parliament and Esbjerg’s mayor, Johnny Søtrup, with him during the visit, which took place on board the ’Esvagt Beta’. Managing Director, Søren Nørgaard Thomsen, outlined the history of the shipping company and told them about rescue operations and the company’s areas of work. He also spoke about how green energy is becoming an ever increasing part of ESVAGT. This is partly due to the shipping company increasingly supplementing its work in the oil and gas sector with an increasing focus on wind energy, and party due to ESVAGT’s continued focus on energy optimising both the existing fleet and new builds. Both elements pleased the minister:

”We are an absolute elite within seafaring nations and measured by CO2 emissions, our fleets are absolute world champions. These are excellent examples of the competences that help to create employment,” said Lars Chr. Lilleholt.