Jesper Møhring Madsen has been relieved from ‘Esvagt Bergen’ after being appointed HSEQ Manager in ESVAGT after nearly 20 years at sea.

- It is probably an advantage that I have spent a little time on deck myself.

So says Jesper Møhring Madsen, the newly appointed HSEQ Manager in ESVAGT, about the tasks waiting for him in his new job.

”A little time on deck” is a solid understatement, for the 39-year-old HSEQ Manager has spent nearly half of his life time at sea.

As a big boy he became an Officer Candidate with A. P. Moller, and via the Navy, Mærsk Line and Mærsk Supply – and a quick trip past an adult apprenticeship as a carpenter – he landed at ESVAGT in 2004. Here he worked as a Navigator and Master until in 2011 he became responsible for getting the new build ”Esvagt Bergen” worked into the fleet as the shipping company’s first vessel of the X-bow type design.

The years on deck and bridge will be an ingrained part of his personality when he embarks on his new task onshore.

- I think that one of my strengths in the job will be that I know something about the work out there. I know the jargon, the rhythm and the everyday, and I have full understanding for the human factor and that people may see things differently out there than they do onshore. I know, for example, how bad weather on the sea can influence the mood in a way that people do not give expression to, but which will still make itself felt. I know the feeling if the crew change vessel takes too long to reach harbour, and you need to get back home as soon as possible, just because there were some other tasks that had to be done, says Jesper Møhring Madsen.

It is not an exclusion of the sea, but rather a choice for new challenges and new tasks that made him accept when he was asked if the HSEQ job would be an exciting job for him.

- The HSEQ work is so central for what we do at ESVAGT. The entire approach to the work is permeated by joint responsibility for working safely, and this is what I am looking forward to: to making contributions to the further development of all of it, he says.

For Jesper Møhring Madsen, the next safety promoting activity for the company to work on is what is placed between the ears of the colleagues. This is where the safety potential is biggest:

- Safety at ESVAGT is not a matter of hardware that will increase safety, and we have gone a long way in the direction of becoming a safe work place – in this respect we have done really well. Our potential for development is placed under the helmet in the behaviour we demonstrate, he says.

He himself is fully aware of the importance of being a good role model for safe behaviour.

- I have worked with ESVAGT since 2004, and I have taken part in solving tasks in ways we would hardly be credited for today, he says:

- But our safety culture has developed in a positive manner, especially because our behaviour has changed. Ways we used to accept for doing things are no longer acceptable. I am very conscious that we as Managers have a big task being role models both on the vessels and ashore, so that a safe approach to the work and an understanding of the work that we carry out can spread to the other colleagues. We simply have to be good role models for the safety culture we wish to propagate.

For a shipping company in rapid, continued growth such as ESVAGT, it can be a difficult task to include the culture, but that does not make the task less important:

- Recent years have seen an enormous growth, and the safety culture has had a hard time. We need to have a core of employees who are good bearers of culture for safe behaviour. The growth rate must never exceed what this core of people can possibly pass on and influence the new starters, enabling the culture to get integrated from the very beginning, says Jesper Møhring Madsen. 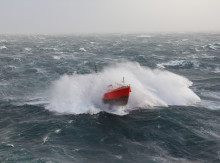