The offshore wind service contracts with Siemens for the delivery of the “Esvagt Froude” and “Esvagt Faraday” mark a pivotal change for ESVAGT. They have opened up completely new markets and brought the introduction of a new vessel type in the fleet. The “Esvagt Froude” and the “Esvagt Faraday” are the world’s first purpose built Wind Service Operation Vessels (SOV); offshore wind farm vessels designed for the concept developed by ESVAGT.

However, the SOVs are not the only new builds that have been premiered with the offshore wind service contracts.

STB 12 is the name of the newly developed type of vessel that has not attracted the same attention as the larger SOVs but have nonetheless been an important supplement to the SOVs for service duties in the offshore wind farms.

STB 12 is a mothership based Safe Transfer Boat that is used to transfer technicians safely to wind turbines. One of the unique features of the STB 12 is that is has been approved by the Danish Maritime Authority (Søfartsstyrelsen) as a separate craft. They have been christened the “Esvagt Wind 1” and “Esvagt Wind 2” and can sail into port for goods and up to 8 people. These attributes have influenced the design, says Bjarne Mikkelsen, Senior Service Manager, who, together with Ole Andersen from Special Services, constructed the new vessel type – a job that started back in 2010:

“We focussed on making the vessel fuel saving, easy to manoeuvre and comfortable to sit in as passenger – also for people who are not used to working on water,” says Bjarne Mikkelsen.

The requirements for the vessel were partly met by choosing the right engines. The STB 12 has two inboard motors with tractory, contra-rotating propellers. Volvo Penta calls the motor series the IPS 450 because the motor, which in reality ’only’ has 330 hp, has traction equivalent to a 450 hp with a water jet:

”The tractory propellers work in undisturbed water, which both increases comfort and efficiency,” says Ole Andersen:

”This gives a reduced fuel consumption of up to 30 percent compared to other solutions – and not least unusually good manoeuvrability and comfort. It is one of the most powerful vessels that I have tried and at the same time, it is incredibly easy to manoeuvre – quite simply with a joystick,” he says.

The noise level has been a positive surprise. ESVAGT had involved a noise consultant from the outset to ensure that it was acoustically comfortable to be on board:

”We wanted a vessel that was comfortable in every possible way – including noise. The choice of materials and isolation has focussed on reducing noise as much as possible and it has worked. I can’t remember ever before sitting in a driving seat with a noise level of 64 dB at a speed of 28 knots,” says Bjarne Mikkelsen. 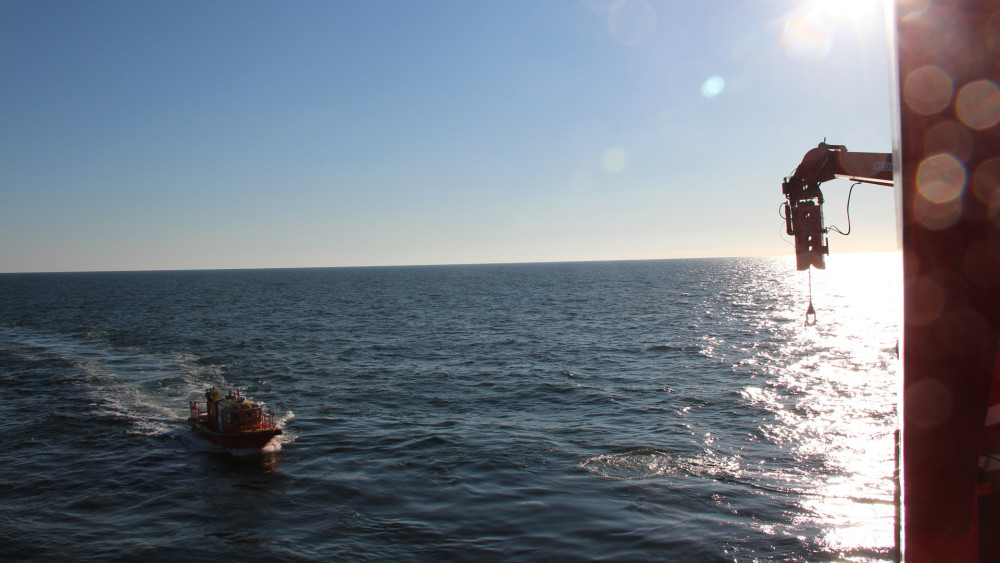 ”We have gained good experience from filming all launch and recoveries at the crew change vessels. We learn from them and use them in training situations. With a new vessel, we would like to ensure that we learn as much as possible – and cameras for and aft will help us to do that,” says Bjarne Mikkelsen.