The first year of SOV operations has been rewarding and informative. Experience with STBs is being integrated into upcoming designs.

The first years’ experience with the SOVs, the ’Esvagt Froude’ and the ’Esvagt Faraday’ can be summed up in one word: success.

The vessels, servicing Siemens Wind Power’s offshore wind turbine farms the Baltic II (’Esvagt Froude’) and the Butendiek (’Esvagt Faraday’), are the first vessels constructed for the SOV concept that ESVAGT has developed.

“We have hit the nail on the head,” states Ole Ditlev Nielsen, Chief Commercial & Safety Officer for ESVAGT:

“The vessels have the day-to-day flexibility that we aimed for and the solutions with the walk-to-work concept and STB transfers work optimally,” he says.

The SOVs combine a newly developed vessel design and a new service concept; and both have proved their worth.

“Much has been learnt during the first year and we are constantly writing new chapters into the manual for working with SOVs. Basically, our first year of work has shown us that the idea is sound and the concept works as we hoped it would,” says Ole Ditlev Nielsen.

An important element to ESVAGT’s concept was the introduction of Safe Transfer Boats (STB12), which are used to supplement the walk-to-work concept and to collect supplies. The STB12 is a class approved Crew Transfer Vessel and is an original design for the SOV concept:

“From an operational point of view, the STB12 gives a great deal of freedom and efficiency. The mother ship is free to carry out its duties in the wind farm while the STB12 sails back to shore. The STB12 can also be used for transfers to the offshore wind turbines, making it possible to run operations simultaneously. This increases efficiency enormously,” says Ole Ditlev Nielsen. 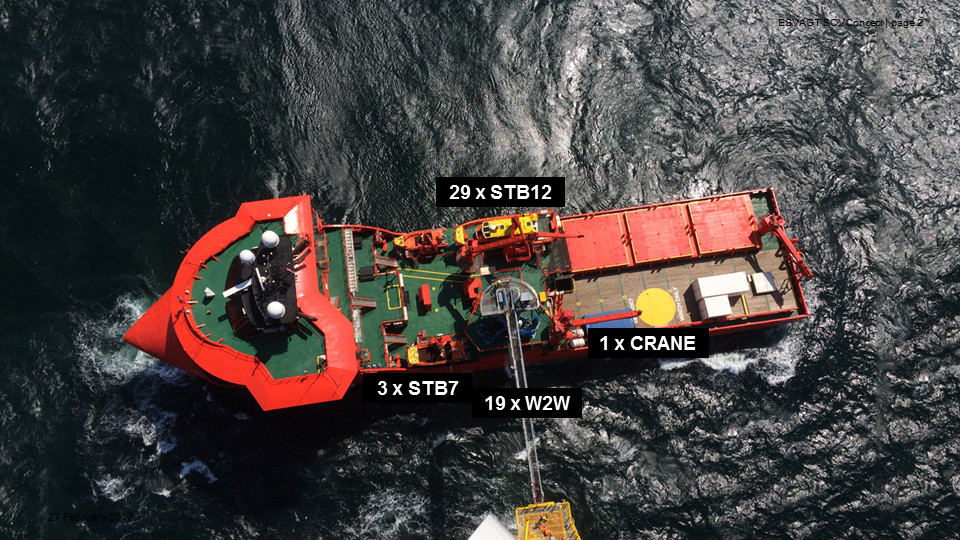 As a concept, the SOV and STB12 have proven to be an effective solution. It provides efficient operations – for example, 52 turbine operations were performed in just 13 hours using crane, walk-to-work and boat transfers. This number of operations would have taken double as long if walk-to-work had been used alone.

“The concept works because the customer and crew work together really well and have established teams that use the full potential for performing their work safely and effectively,” says Ole Ditlev Nielsen:

“The SOV concept provides another platform for cooperation, and both the crew and customer have succeeded in taking full advantage of this. Both parties have chosen to see solutions rather than limitations, and that has helped to free up more available time in just the way we hoped,” he says.

Both the ’Esvagt Froude’ and the ’Esvagt Faraday’ have been designed for low oil consumption and low NOX emissions. The first year of operations has shown that those levels are already lower than expected:

“The design is an important factor in explaining these low levels but mindful behaviour and good planning have certainly also played a part. We would probably not have seen such low levels without the mindset that the crew and customers have demonstrated. They remember to plan their work and have a system of operating that makes this planning possible. For example, they set anchor instead of using DP whenever possible and many tasks are performed by the STB12. The effect of attitude is of great importance,” says Ole Ditlev Nielsen.

As of the 1st of August 2016, SOVs had performed 32,000 transfers using the walk-to-work. To date this year, there have been around 5,000 vessel transfers from the ’Esvagt Froude’ and ’Esvagt Faraday’ alone.

Experience at sea incorporated into STB12

The STBs have been particularly busy in their first year. Crew and charter have offered constructive suggestions for improvement for the next generation.